When visiting Yellowstone National Park in the winter, most of the roads are closed to vehicular traffic.  Therefore, to transition between Yellowstone and Grand Teton NP, we drove a familiar route through portions of Idaho.  It’s always full of adventure and photographic opportunities.

Trumpeter swans seemed to be just about everywhere.  Always appearing so elegant as they foraged in the waters, sometimes as a couple … sometimes solo.

In the midst of the silence of the winter, a Barrow’s Goldeneye flies by overhead.

Some of the wildlife subjects were happy to cooperate with my photo shoots, but not all, as evidenced by this young mule deer.  LOL 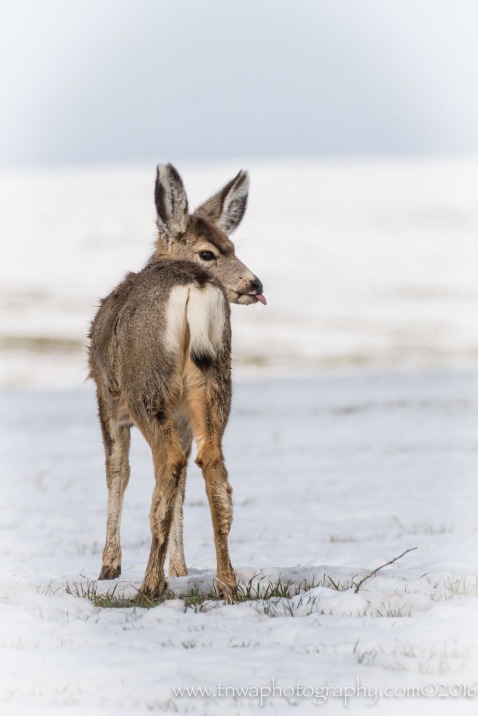 Driving along the highway at about 75 mph (OK, I hope that we weren’t speeding), I happened to spot this great horned owl in a leafless tree along the road.  I had Tom double back and to my surprise, it was still there and cooperated for an image or two.

As fun as it was to see the great horned owl, we have those in Florida.  It had always been my dream to get a saw whet owl, so we went off in search of one, with the help of a great friend.  We searched for quite some time and I thought it wasn’t going to happen.  All of a sudden, I got word that she had found it.  There it was … just the cutest thing ever … well, it would have been without that darn branch in front of it.  No worries, it was my first and I’ll take it.

Look at those adorable eyes … so mesmerizing and captivating.  I could have stayed in its presence forever, but alas, we had to get on our way.  As I said, it was my first, but I certainly hope not my last.

The next morning, we tried to venture out to have more bird encounters, but Mother Nature had other ideas.  When we arrived to the wildlife refuge, we could see signs of wildlife being present ….

… but in reality, we really couldn’t see ANYTHING around us.  I’m talking total whiteout situation, wind blowing and all.  Oh well, I guess it wasn’t mean to be.  Before Tom would risk driving off the dirt road berms, I thought it best to save the drive for another time.

Now, for those of you who read the blog from Mt. Evans last summer, you might remember how bummed I was when we arrived and found the summit road to Mt. Evans closed for repairs.  Tom heroically rode his mountain bike up to the top and got some shots of the mountain goats for me … but I wanted MY OWN!!!

Well, my turn came when we spotted some on the mountainside, in the snow, a bit outside of the Tetons.  I was thrilled to see them, though they were adorned with collars and tags (i.e. ear jewelry).  Again, I was simply excited to see and photograph them, so I just blocked out those annoying features on them. 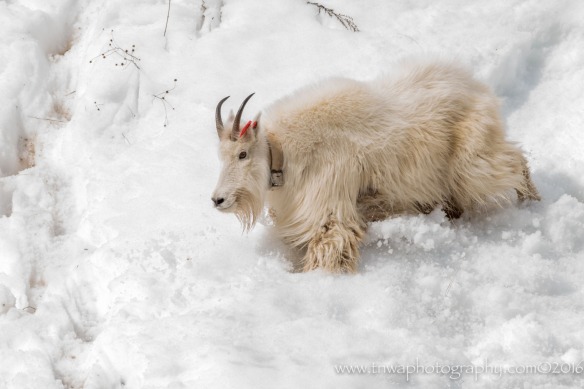 The young ones of course didn’t have the tagging on them, so they were fun to catch images of, as they made their way in the snow while following their moms. 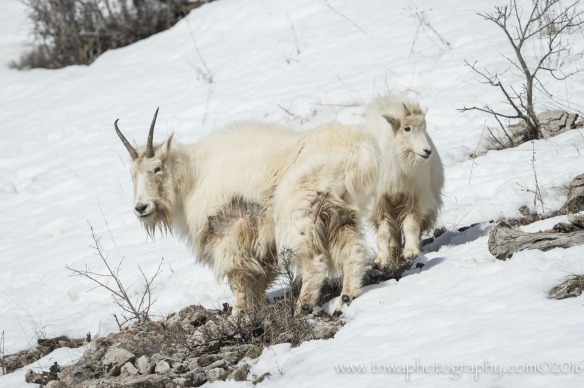 Though they were a bit shaggy, they were still fabulous.  I hoped at this time that we would see them again on our way back out over the pass.  Fingers crossed anyways.  🙂

Yes, we had a great time, not only photographing the wildlife of the area.  We also found a great new sushi restaurant … YUM!!!