I’m sure that you’ve all heard about the Seven Wonders of the World, right?  Well, how many of you also know that there’s a Seven Wonders of Washington State designated as well?  Yep, that’s right and our next stop in the blog (or two posts) is probably the most beautiful of all.  I’m talking about the southeastern rolling hills and farmlands of southeastern Washington State known as the Palouse region.  This is not our first time out there … not even our second … but I believe our third.  We love it so much that we travel out there, from SE Florida, as often as we can.  Come along with us throughout some of the area and up to Steptoe Butte for a sunset shoot.

As you can see, simply the drive out through the farmlands is awe-inspiring.  Mind you, we haven’t even been in Washington state for more than a few hours at this point and we’re already in hurry up and get there mode.  LOL.  Luckily, on our way we cross paths with a beautiful great horned owl which unfortunately left its lush tree setting and opted for the power line instead.  I’ll have to have a talk with that owl about preferred photo op locations.

Steptoe Butte has an elevation of 3,618 feet and offers a 360 degree view of the Palouse area.  As you drive up to the summit, it’s difficult not to stop on every corner, for there’s so much “eye candy” out here for landscape photography.

As the sun began to drop closer to the horizon we were gathered in silence and full anticipation mode of what was to come.

Right about then I heard another photographer softly call out that we weren’t alone to come out to watch the sunset.  It was then I saw 2 deer venturing out onto the butte hillside to join us.  In addition, you could hear the yelps of distant coyotes and the calls of ring-necked pheasants.  I was so thrilled about having a few wildlife moments, that I almost forgot why I was there. 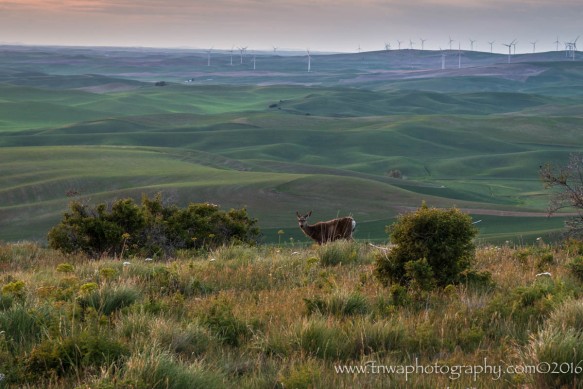 The skies were changing with every minute that passed … perhaps every second.  The colors and tones in the sky were gorgeous. 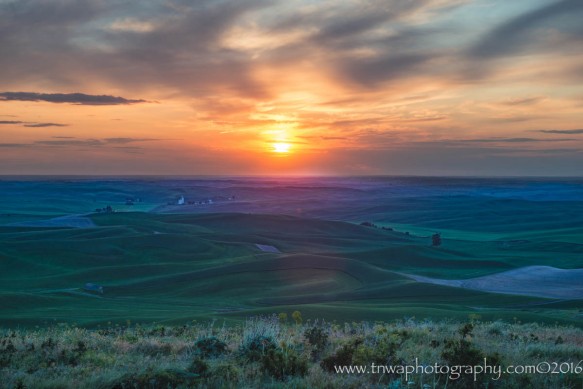 Eventually, the sun dipped below the horizon and the colors soon retreated nearer to the horizon as well.  It was quite unexpectantly cold up on the butte, but when you’re shooting beauty such as this, you don’t feel a thing, except the fresh air hitting your face and your heart racing for more.

Of course, there’s more to the Palouse than rolling hills and farmlands.  We were also treated to several photo ops including old trucks, rusty cars, and of course, the famous barns that call the area home. 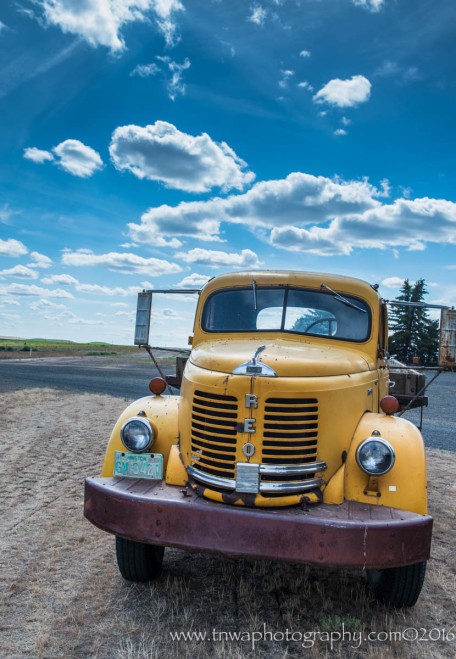 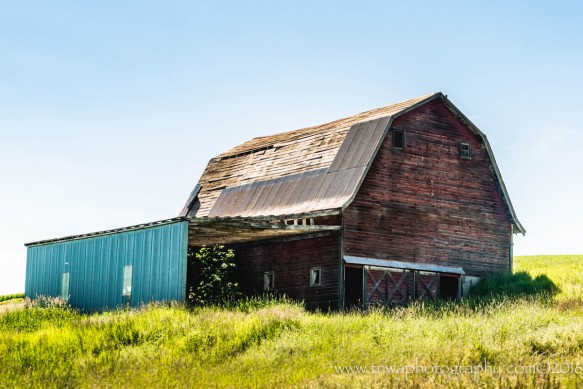 Such history abounds out there at almost every turn in the meandering road.

Some areas are still being used … some preserved … some dismantled, such as this old stripped down silo.  I found it quite interesting to photograph and Tom toured around it a bit.  I can’t tell you how hard it is to get that guy away from places with history.  🙂 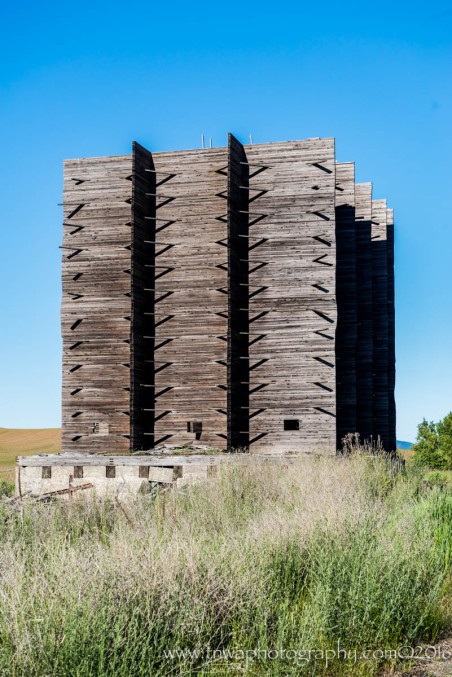 The vast picturesque landscapes that abound are primarily agricultural in nature and their appearance is dictated by the seasons.  In the late spring and summer, the landscape resembles that of a green carpet with some light brown or other color fields running through it.  By the fall, when the fields are ready to harvest, they turn browner.  No matter the color, the light plays a big role in producing the shadows which make the area comes alive in ever-changing views. 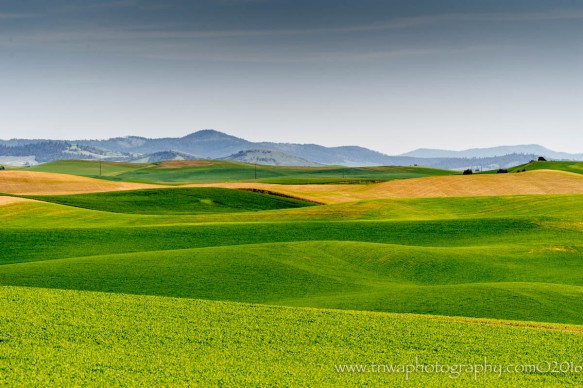 It’s so very beautiful to see and I find myself lost in the lines within the scene.

Lone trees, or patches of trees, add interest to the landscape as well. 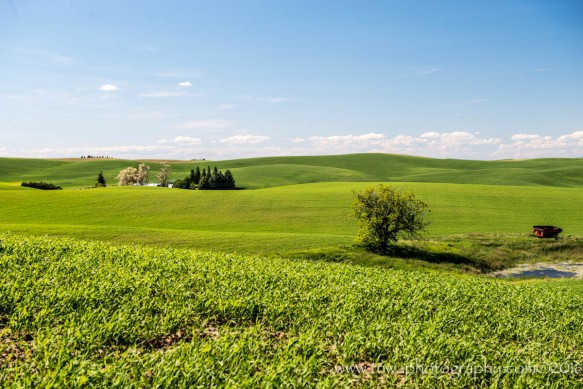 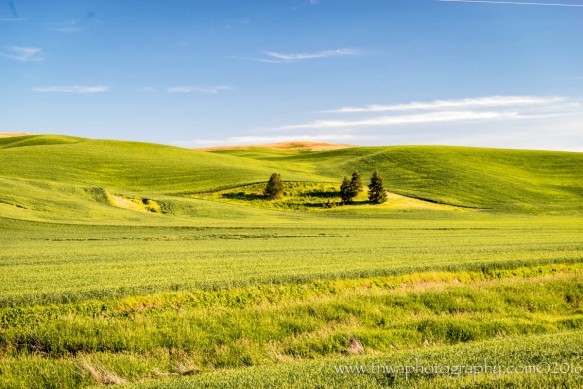 In Uniontown, along the 208-mile Palouse Scenic Highway, we always make sure to visit the Dahmen Barn and the infamous wheel fence.  I was a bit sad this year when the barn happened to be closed and I couldn’t check out the gorgeous works of the local artisans.

The barn complex has been expanded since we last visited it. 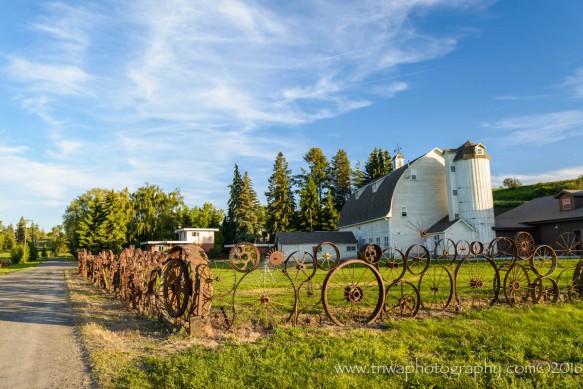 By the end of day 2, we were treated to another beautiful sunset … this time photographed from the roads.

Next Up:  How about some kayaking?