One of the most missed photographic subjects to me are the burrowing owls.  It’s isn’t that we don’t have them here in western Colorado, it’s just that these south Florida owls I have come to know and love, are just too darned cute.  In CO, our burrowing owls occupy previously constructed prairie dog burrows.  In FL, they construct their own burrows.  As I’m preparing to return to visit with them again, among other things, I wanted to take a look back at images from 2017. 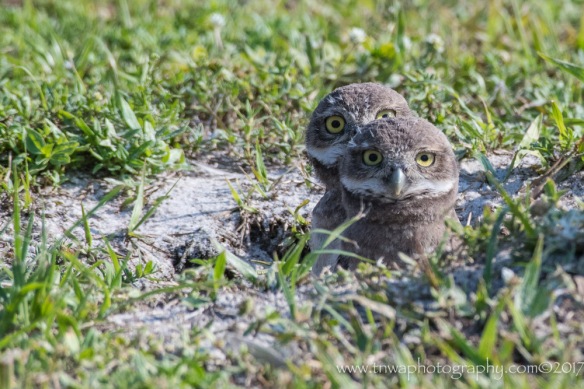 Young burrowing owls are some of the most entertaining subjects to ever photograph.  In years past, I would spend hours, many days a week, watching and shooting them (digitally of course).  Most have some the most beautiful big yellow eyes, which are incredibly captivating. 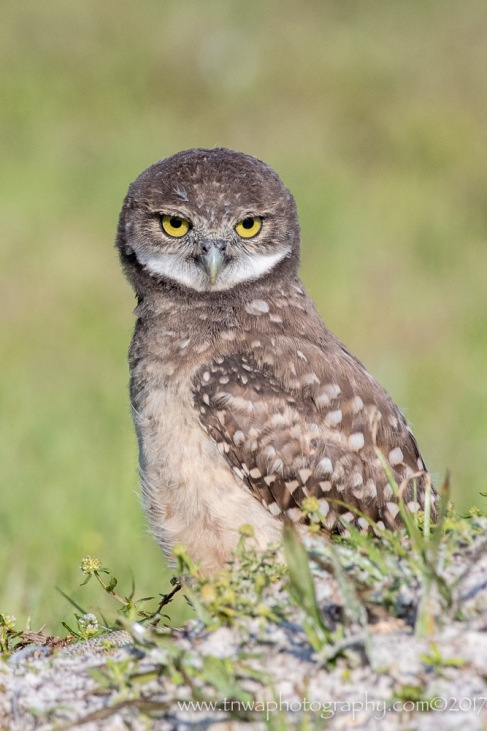 But not all … as you can see this parent owl on the left has light brown eyes.  Both of its offspring though did have the more common tradition yellow eyes. 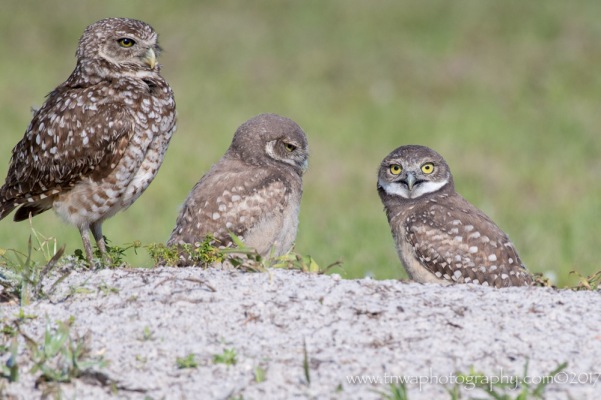 The young owlets really have a sibling love for one another, though that doesn’t mean that they always play nice.  LOL 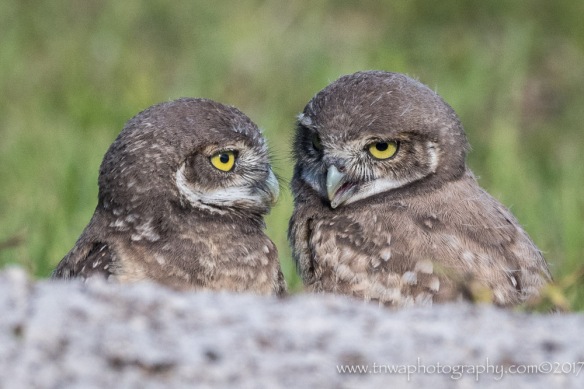 Mom and dad always stand by, supervising when necessary, but primarily watching over the burrow for signs of trouble overhead.  With several rapid succession “barks”, they get their mate and their young into the burrow in record speed. 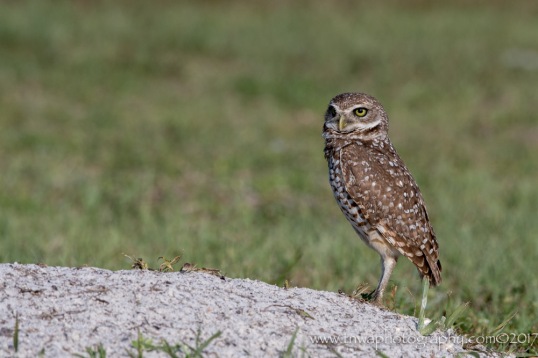 The adults generally are quite tolerant of onlookers … I mean, why else would they intentionally build their burrows in highly public, quite busy places.  Over time, I’ve become quite understanding of their behaviors, sensing when my presence is not welcomed or when “close” is “close enough”, regardless of my actual distance.  To me, that’s the most important thing.  As a wildlife photographer, I want my subject to be acting totally natural and feeling quite at ease. 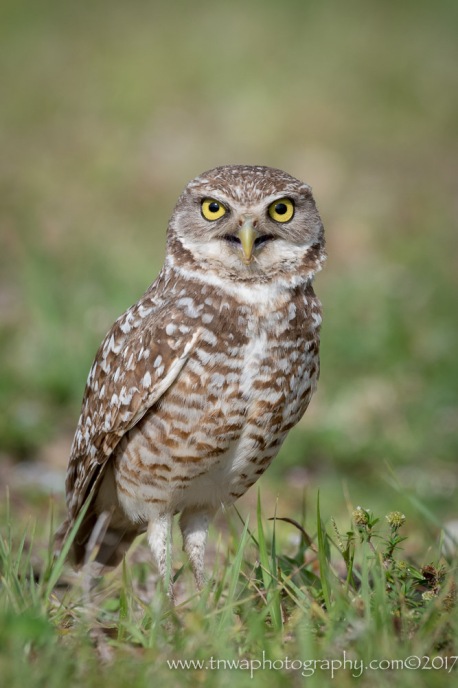 In this particular burrow, the young siblings had all sorts of colors for eyes, as you can see.  It’s increasingly more common now than before to see owlets with varying degrees of dark eyes.  Believe it or not, they have their own intrigue to them.  Curious expressions are endless. 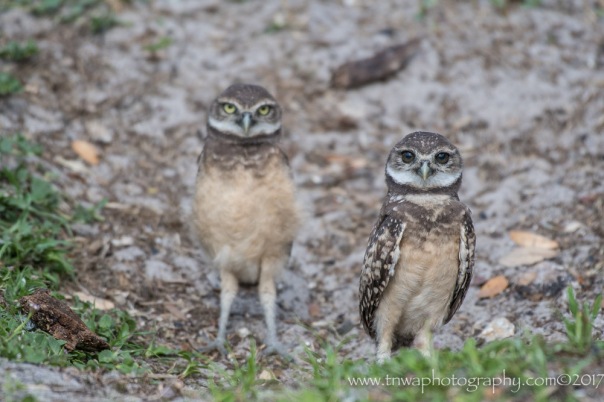 Adult owls are not only taller and bigger than their young, but they also have more speckled feathers throughout.  You’ll notice that the owlets have that creamy colored chest and belly when they’re young. 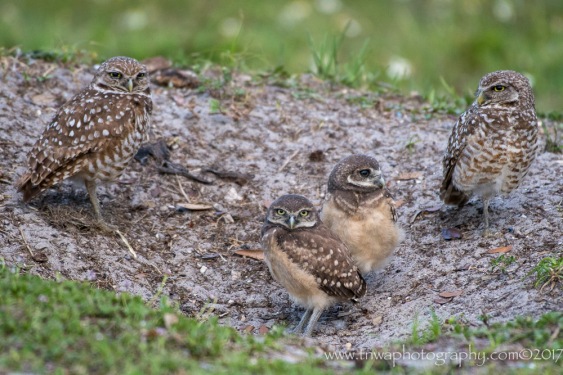 Most burrows have anywhere from 3-5 young ones, though they can range from 1 to 7!!  Imagine having to take care of 7 young mouths! 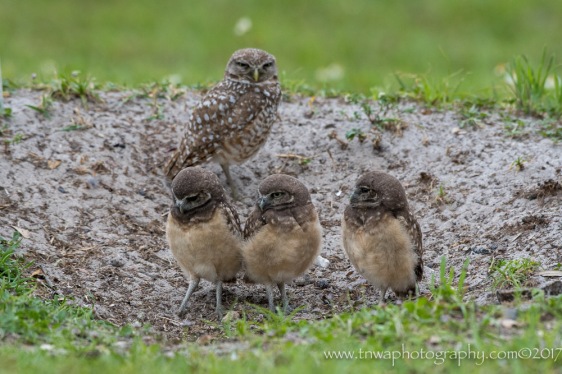 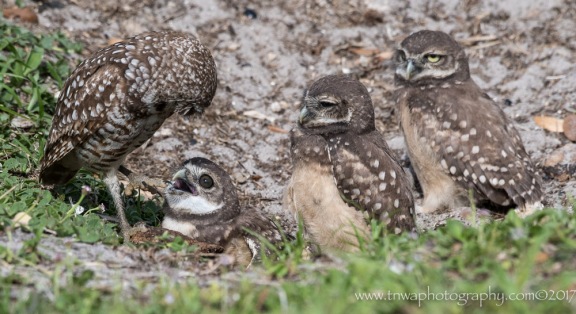 The parents go out and hunt for food in the evening or early morning hours, often caching it nearby for later retrieval and consumption.  You can always tell when the food is brought back to the burrow … as the young ones will frantically emerge and begin a tug-of-war over it. 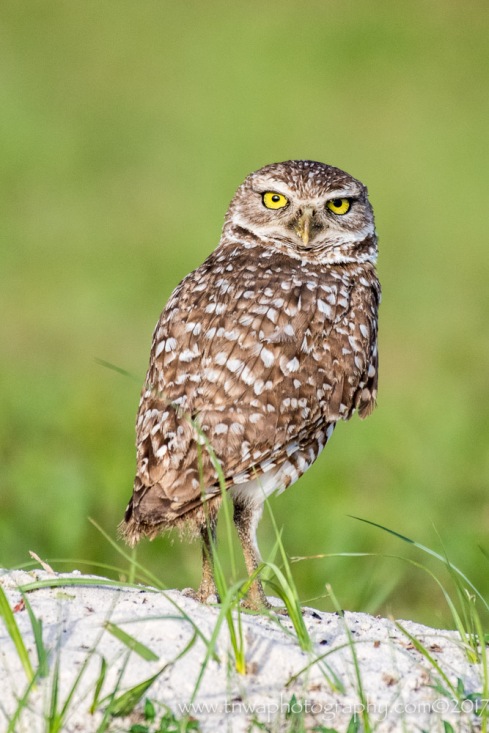 They also assist in the grooming of the young ones, offering up “canoodling” sessions.  So sweet.  🙂 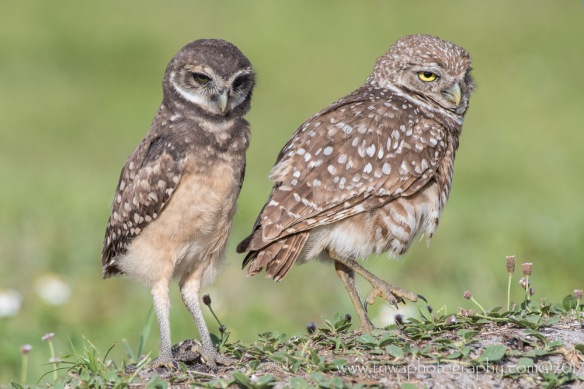 When the young ones lock eyes with you, it’s so hard to look away … and why would you.  You can literally see their little minds at work.  See, for the first approximately 2 weeks of life, they remain in the safety of the burrow.  When they emerge, they are amazed at just about everything in their world.  When I see these images, I just about cry at how much I miss these sweetest of faces. 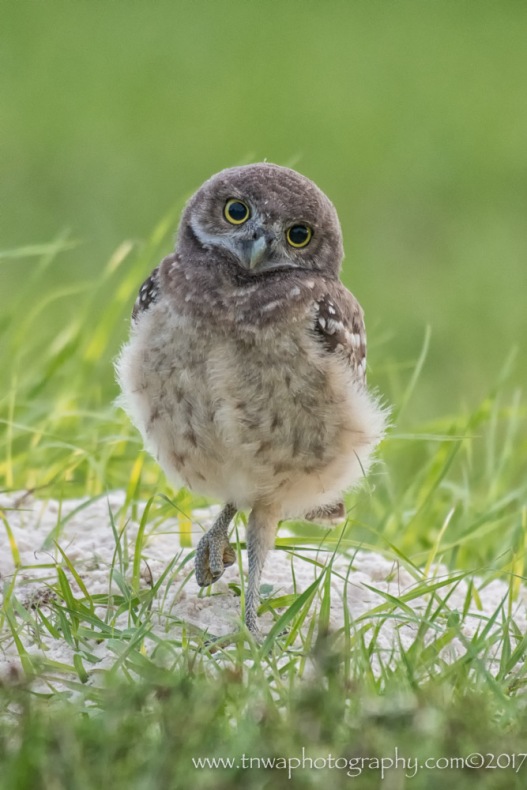 They do everything they can to learn about everything. 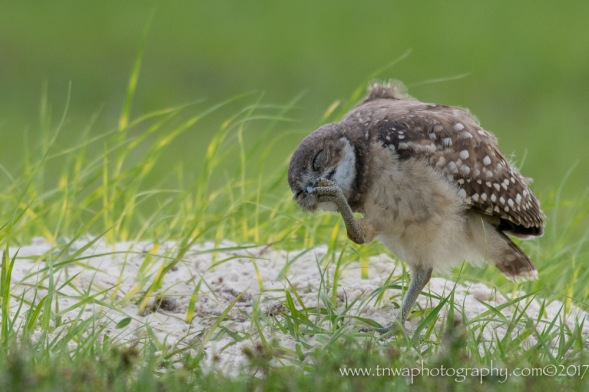 Often that includes looking up in the air too.  They detect small insects flying about, balloons in the air, planes in the sky … you name it.  They also watch other birds in the sky and quickly learn for themselves who friend and foe is. 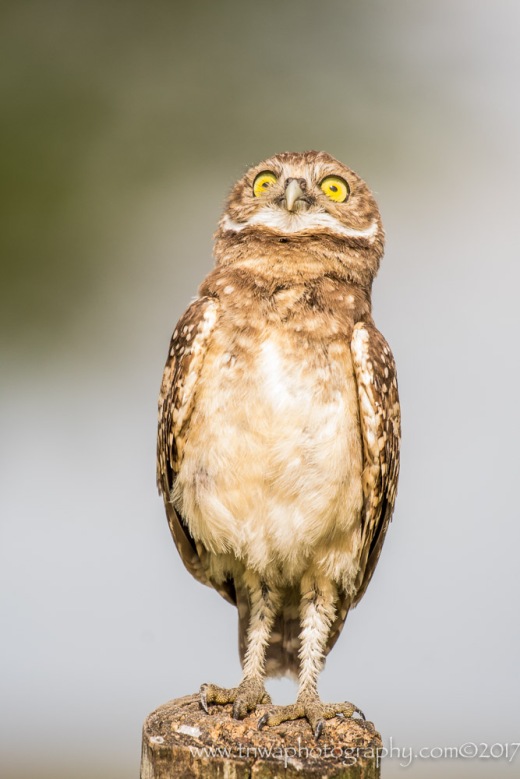 Yep, silly expressions are many and have made me burst into laughter on site!  LOL 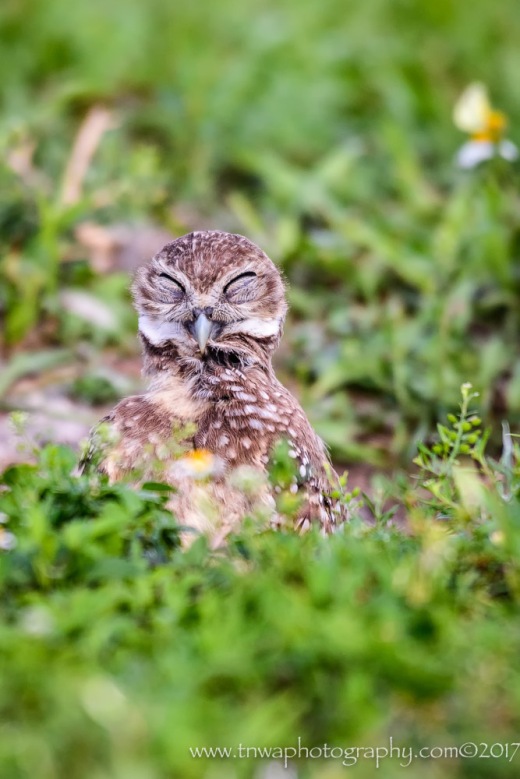 I love it when they enter the flowers … OK, so they might be weeds, but the yellow in them is still pretty with their yellow eyes. 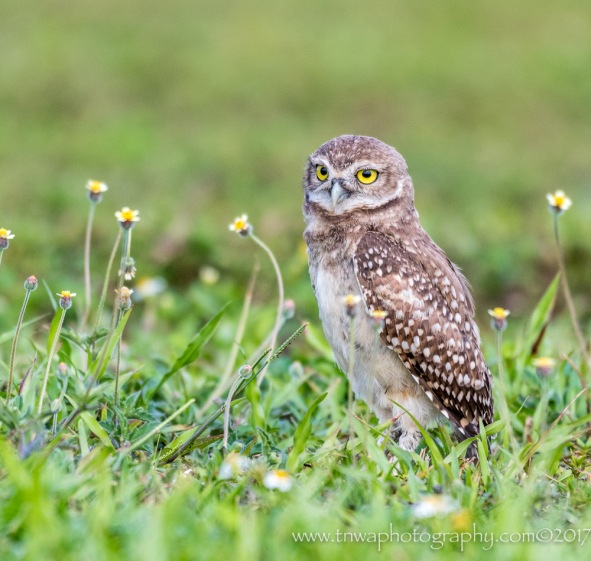 Like our own young, the discovery of their feet and how they can control its movement is always a fun adventure for them. 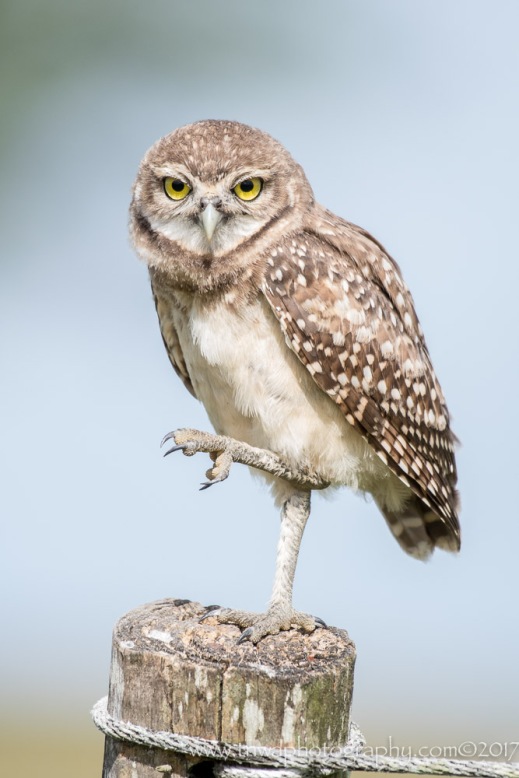 One last shot of this particularly sweet burrowing owl … really looks like it was a GQ model or something.  Oh yeah, I can’t wait to be united with these little ones…. so many new next generation owls to meet. 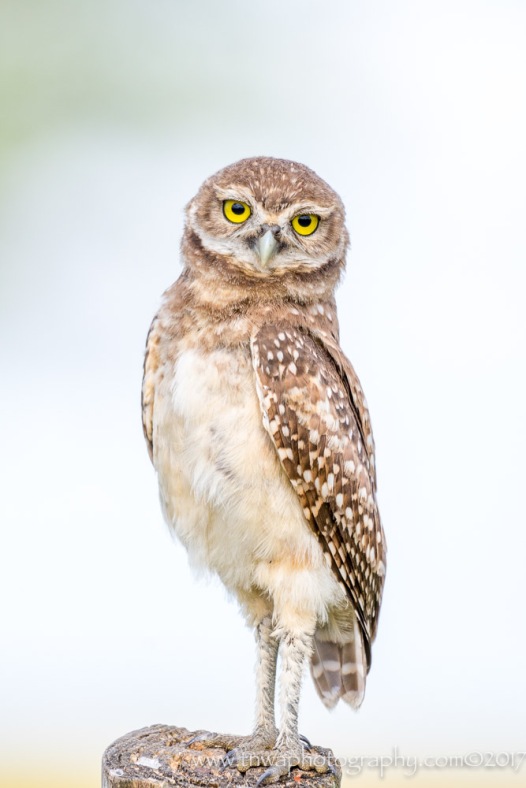 I find it fascinating that when they yawn or prepare to cough up a pellet, you get this face.  Can’t help but notice how their open mouth and their beak form a heart shape … can’t think of anything more appropriate.  ❤ 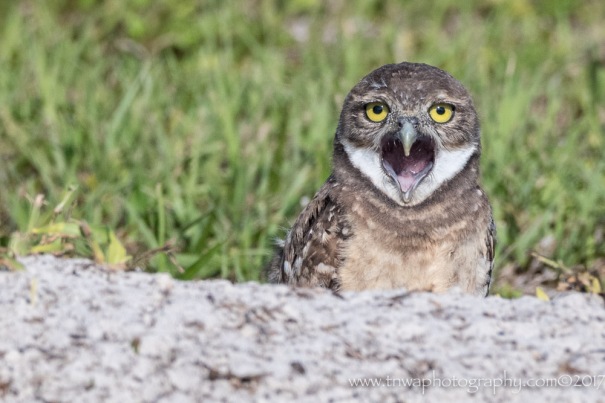 Hope that everyone enjoyed my “friends”.  Be on the lookout for more images to come.

Next Up:  Carson Valley wildlife