Onward on the Richardson Highway, we headed towards Paxson and the east entrance to the famous Denali Highway.  Some of you might remember that we traveled this road last year, got magnificent mountain views on the east side and about 2/3 of the way across, inclimate weather on the west side, and saw the aurora borealis in between.  We hoped for the aurora and the wonderful views, but hoped for no repeat of all of that rain on the other side of this 124-mile, mostly gravel road, truly the “road less traveled”.

Though we were in some nasty weather early in the morning, it lifted to scattered clouds and less rain predicted as the day progressed.

When we arrived to Paxson, we began our path onto the “highway”, at least as far as the paved road went.  So far, this was the beginning of a repeat with respect to the weather we experienced last year.  The views overlooking the Alaskan Range were once again magnificent! 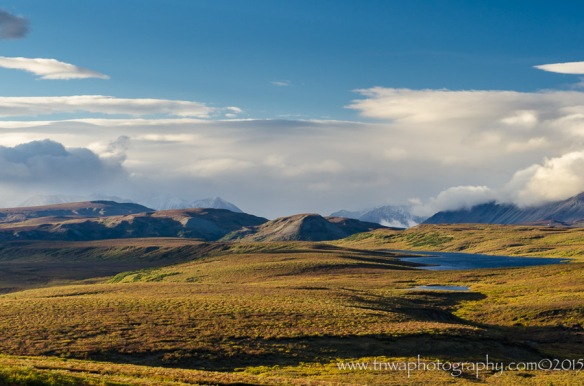 We decided, like last year, to hang out on the east side and try our luck at spotting the northern lights.  Fat chance that we would see it again, but it was too tempting to pass up the chance.  We set our alarms for about midnight, woke up reluctantly, and saw nothing at first.  Re-setting the alarm for another 30 minutes, we then woke up and once our eyes adjusted, there it was … and off I went in a jiffy!

Two things, other than the obvious, always come to mind when I view the aurora borealis.  First, how each aurora sighting is so different than the last and how the aurora evolves as the night wears on. 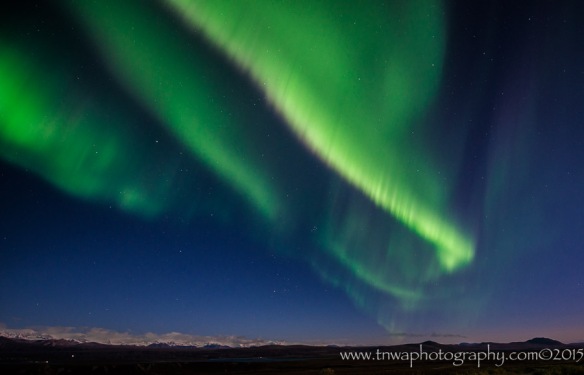 Second is that no matter how cold it is, or how cold you should feel (especially when you’ve been warmed up in the RV sleeping, in your pjs, when you hurriedly race out only half dressed for the temperatures that you’re about to endure), but as soon as you see natures light show, you never even give the slightest thought to the cold.  That is, until the illumination and dance stops, even just briefly, and the cold reaches your brain again until … you guessed it, until it emerges again.  LOL.  I still get the same euphoria rushing over me when I witness the lights, pulsing and dancing across the vast landscape and overhead in the sky.  Like no other feeling in the world! 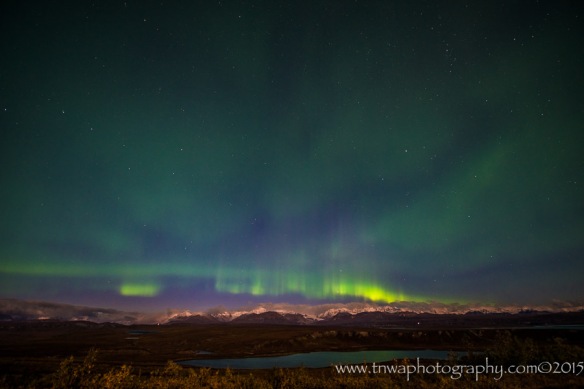 But all good things must come to an end … and it was time for our return to a early morning’s slumber.  When we awoken, there was that magnificent view again … just doesn’t get much better than this alond the “Denali”. 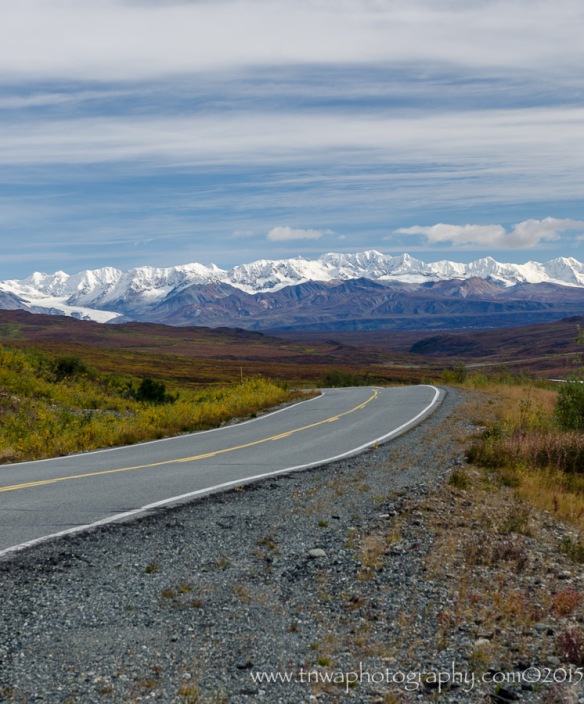 Poor Tom had a few scary moments though this time.  As we cross the highway, we’re always acutely aware that there’s hunting along the way.  As I spotted a few caribou not far from the road, I got all excited and began the process of immediately grabbing my gear for images, but I couldn’t for fear of the hunting that was literally happening right off the road this time.  I’m talking adults and children, armed with shotguns/rifles, walking along the roadside looking to flush out birds, I would imagine.  So, Tom made the decision to not stop the RV once he saw that and headed out.  I guess he knows me too well and didn’t want to deal with any repercussions.

Glad I grabbed a bunch of images of the views along the way we left.

As beautiful as it was on the east side, we knew that heavy rains and snow were due on the east side, so we aborted our travel on the Denali Highway for this year.  Funny, because last year, it was exactly the same.

A last minute decision was made to head up to Fairbanks, on our way to Denali National Park.  That’s one of the things that I love so much about when we travel to Alaska.  Though we have a few definite plans, there are weeks of “flying by the seat of our pants”, being responsive to what nature throws at us and what our spirits guide us to do.  Got to love that!

Next Up:  Fairbanks surprises

Off to Denali we went for another week or so – actually we loved it so much that we returned to Denali for another 4 day stint when Kelli & Mitchell flew out to join us in Anchorage.  Hoping to see the moose rut, it seems that we were still a bit too early to see the real jostling that goes on, but we did see some early “practice sessions”.  We did see many sightings of grizzly bears this year – many times they were sows and their cubs.  As they frolicked in the amazing autumn-kissed tundra or sometimes even in the snow covered landscape, they thrilled me to no end, as I clicked off images to my heart’s content.  Wolf sightings were achieved, as well as coyotes, caribou, golden eagles, harriers, dall sheep, just to name a few.  Conspicuously absent for us in 2012 was the lynx, though I tried really hard… new found friends of ours were successful in seeing one, so I lived vicariously through their sighting.

When we first arrived, we were treated to a vast array of autumn’s best colors.

Autumn color changes were everywhere, as even the caribou has to stop to enjoy the view 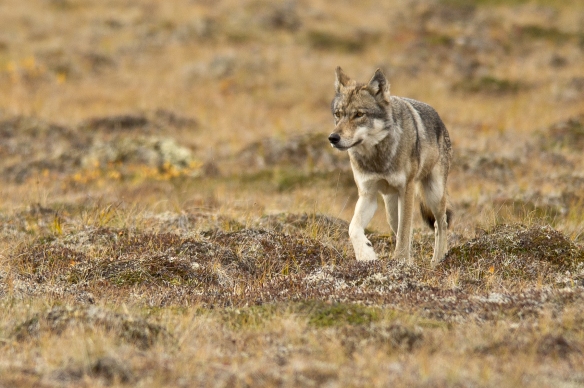 Lone wolf cruising the tundra in search of a meal 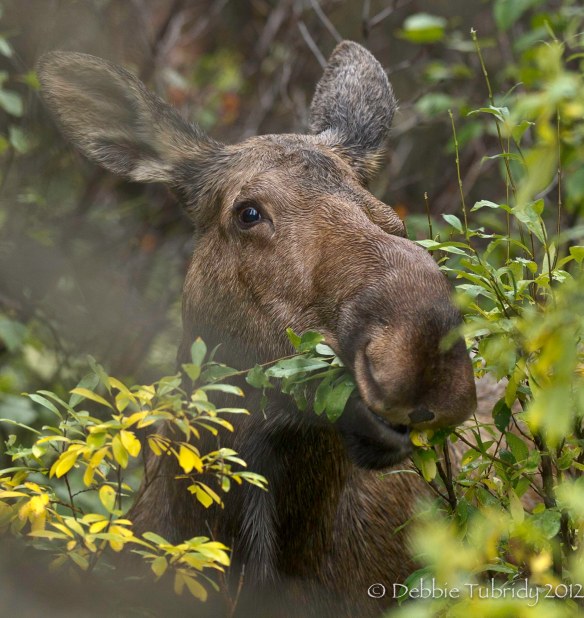 Then the weather began to change, as the fog and rain rolled in 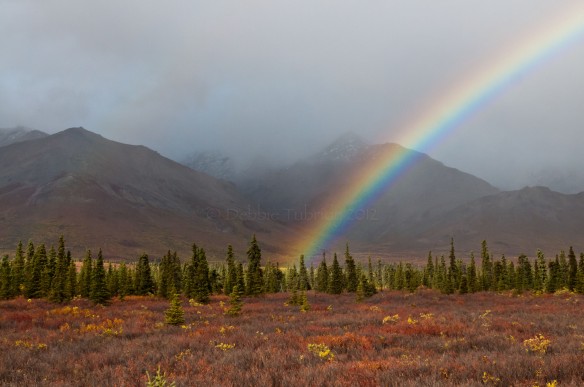 Where’s the pot of gold at the end of this rainbow?

Then it happened ….. SNOW  (remember, we’re quite excited – being from FL and all)

The next day, it was beautiful!  The snow had stopped, the skies were clear, the weather was cold, but plenty of sunshine to help warm us up.  Even the wildlife seemed to enjoy it.

What a fabulous day! 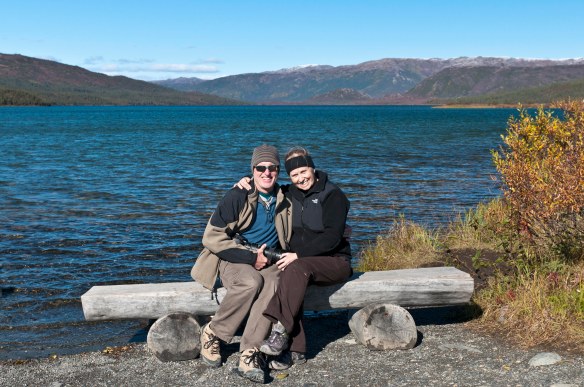 Taking in the view from Wonder Lake 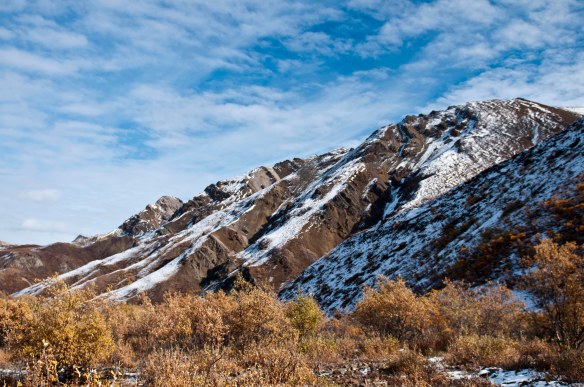 Not a cloud in the sky – viewpoint of Mt. McKinley (aka Denali) from Stony Hill Overlook

Having some fun along the way! 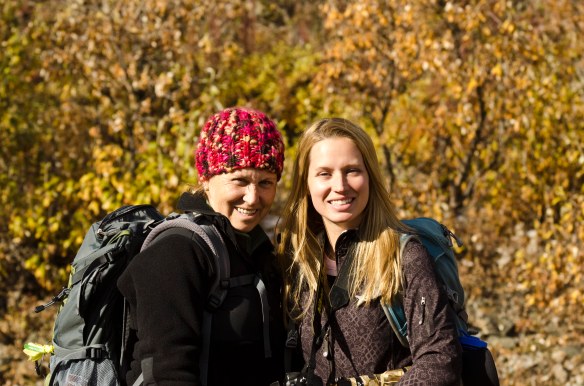 A mother-daughter moment of happiness 🙂

We also traveled to other areas of Alaska, of course, as we always do.  There’s never a shortage of experiences or sights/animals to see and photograph.  I encourage everyone out there that has never visited AK to do so … you won’t be disappointed.

The newlyweds along the Turnagain Arm @ Beluga Point – yes, we did see the belugas!

And our most favorite of all sights, though very different viewing in 2012, is the spectacular aurora borealis.  First experienced by us in 2007 in Chena Hot Springs, outside of Fairbanks, it continues to be sought after by us when we visit AK in the later summer.  This year, the aurora didn’t “dance” across the sky like a blowing curtain, but rather made it’s presence know with an almost glow in the sky.  Not much movement at all, though still very beautiful. 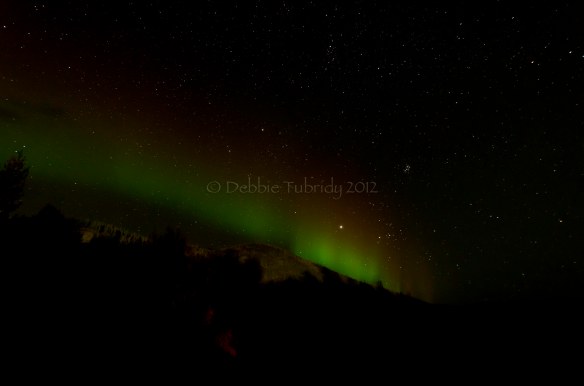 What a wonderful place … ever-changing, awe-inspiring …. warms the heart and soul  🙂