As we begin the 2016 new year, I always take the time to reflect back on the past year.  It was a year of great change for me (as I knew it would be), great opportunities, and awesome experiences.  Here are just a few of the highlights.

Early in the year, when the hot weather cools down a bit, I always take the time to visit “my park” – Everglades National Park.  The Everglades are a place where you visit with great anticipation as to what you’ll find, as the environment changes always depending on the water levels. During the first 5 months of the year, it can be a mecca for bird watchers and photographers, as well as offer landscape gems such as this wonderful, and unexpected, fog bow. 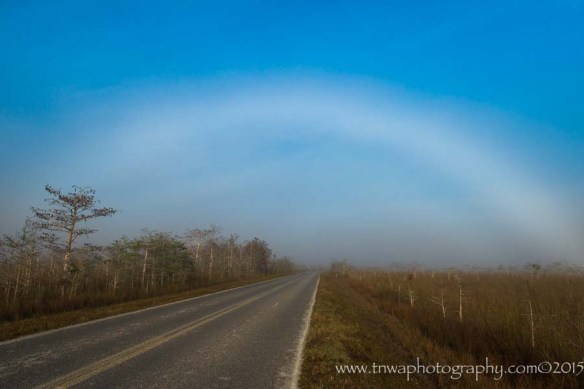 We usually also spend a few weekends up in the Gainesville area early in the year, since we have a home up there.  To my surprise this year, in addition to the influx of migratory sandhill cranes which visit, there was also a whooping crane, specifically No. 9-13.  He stayed for several months before he migrated successfully back to the north in WI. 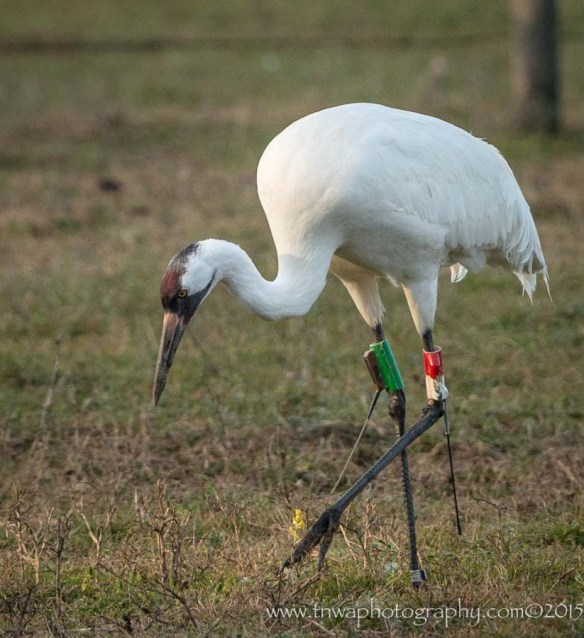 Of course, it was also quite a thrill to share the hiking path with bison at Paynes Prairie Preserve State Park in Alachua County.  As we were on the lookout for the alligators, can you imagine Tom’s surprise when it emerged from the grasses and brush adjacent to where he was standing?  LOL

So far the year had been progressing along routinely, but that was about to change.  On March 4th, I took retirement from my medical sales position (aka my “day job”).  Though it was to happen on its own in 2015, this came about in an unexpected way … I felt like I won the lottery!  LOL  Before long, I learned that Fridays were no longer the best day of the week and I learned to love Mondays!  It’s all about perspective.  🙂

Always an exciting day is the arrival of the swallowtail kites in Florida.  Numerous trips “upstate” followed for more bird photography. 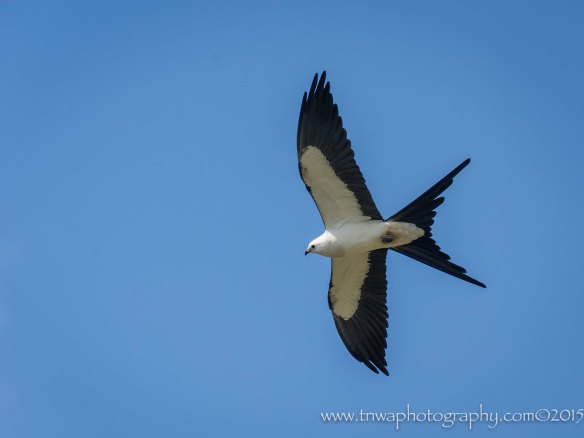 As Kelli and Mitchell progressed with their educational pursuits, they met us out in Bozeman, MT for some snowboarding fun.

Combining that trip for Tom & I, we arrived early and toured Yellowstone NP in what can only be described as an anomaly winter for them, as much of the snow had already begun to melt.  On that trip, I learned the cruelty of nature, as we watched a bison who had fallen through the ice of the frozen pond, and being unable to free itself, eventually died there, and the circle of life displayed itself right before our eyes.  I stood there, numb and crying, as there was nothing that I could do to help. 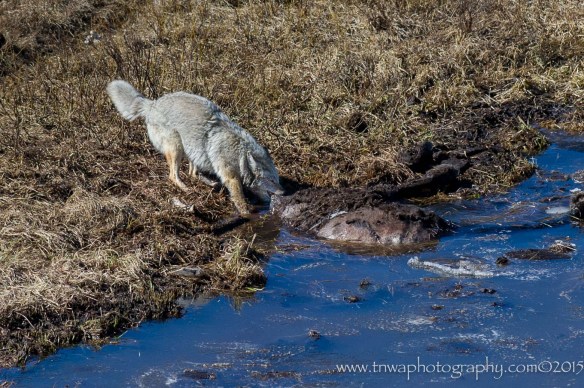 We also encountered many specimens of wildlife, including these wonderful and beautiful bighorn sheep. 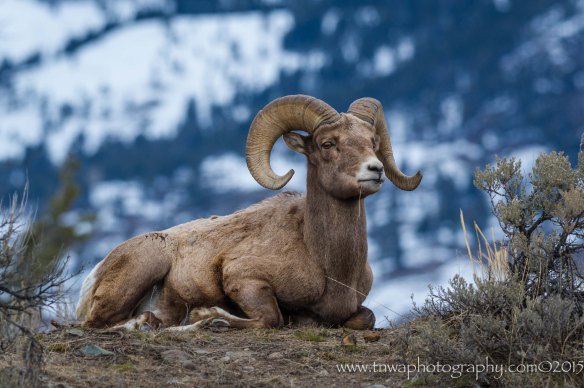 Grand Teton NP was also visited during this trip and the wildlife and landscape opportunities were undeniable.  Who would have thought that we would have a red fox posing so nicely for us as we happily snapped away images.

There’s nothing like experiencing first light on a mountain and the Tetons are no exception.  A better day couldn’t have been possible.

OK, perhaps it was the mother in me, but these bighorn sheep ewes teaching the young ones how to navigate the rocky cliff ledges had me on pins & needles.  It was fascinating beyond belief to witness their skills … I mean, I’m less sure footed on solid ground!  LOL

There were several “firsts” for me in 2015.  I was fortunate enough to photograph both the long-eared owl and the short-eared owl as well.  As many of you know, other than my beloved bears, owls rank very high on my favorites list, so I was thrilled. 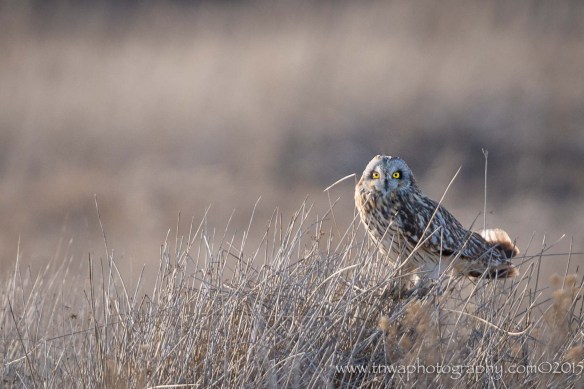 Once back in Florida, I spent many days photographing the courtship, mating, nesting, and raising of the young of many of our birds that make spring in Florida so unbelievably amazing. 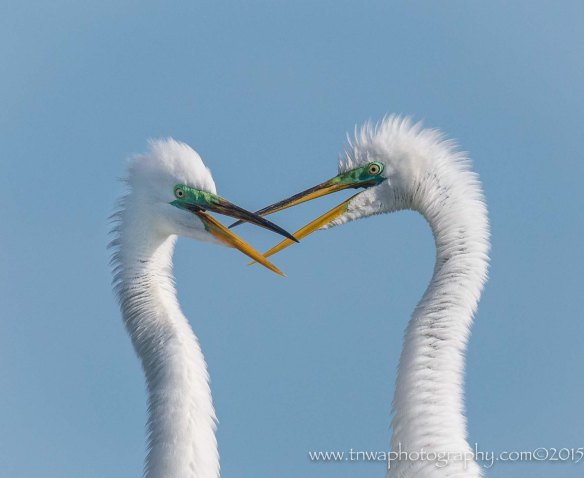 How about a wild American Flamingo?  Yep, it was an amazing experience, one that my tripod still bears the scars of, as I got so excited when I witnessed the flamingo take flight.

In April, Tom competed in the Florida Firefighter Games.  Held at Alafia River State Park, some of the states finest mountain bikers raced through the POURING down rain for medals, both individually and as teams. 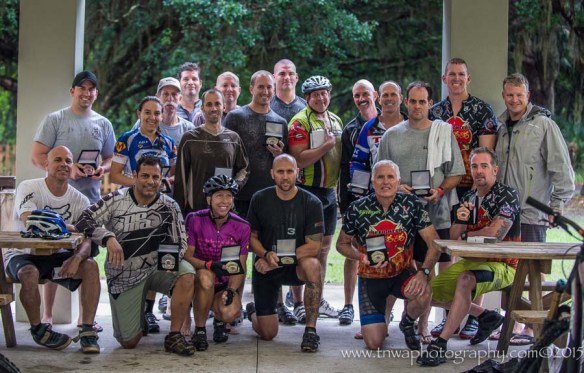 Of course, no season would be complete without my mornings and/or evenings revolving around the burrowing owls.  Once again I had the pleasure of photographing them as they literally grew up before my lens.  Often, I would simply delight in their antics, forgetting to click away.

A real special treat was this bird’s eye view shooting position of this young osprey while dad had just dropped off a nice fresh catch and mom proceeded to feed it.  Someone get this guy a napkin.  🙂

Now that I had more time to do the things that I had always wanted to do, I traveled to the Alligator Farm in St. Augustine, FL.  For 4 days I learned how to best expose for the outdoor subjects, tell a story with my images, use my flash (no more auto mode for the rare times that I actually use it), and even a bit more on processing images too.  A bonus was that we were able to shoot at the rookery a full hour before even the Photo Pass kicks in. 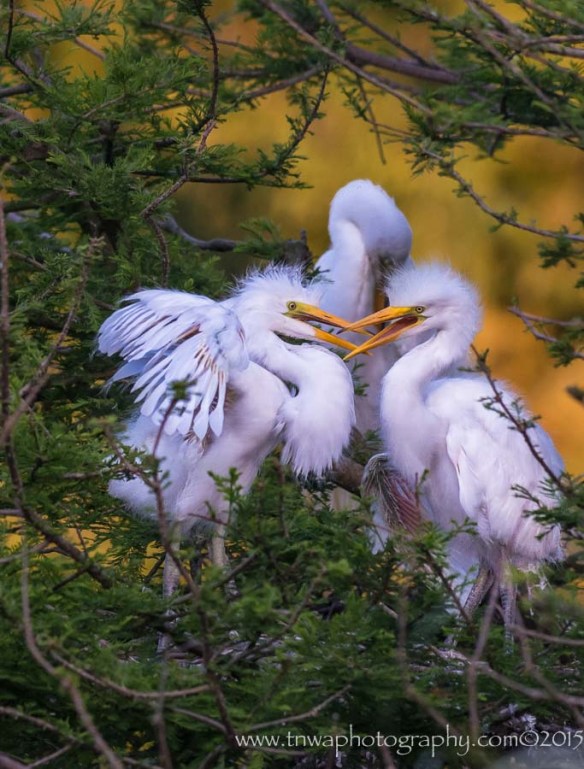 Two trips up to St. Augustine also followed for capturing the courtship, mating, tending to the nest, and taking care of the young, as performed by the least terns.  Sometimes the taking care of was accomplished by teamwork in elimination of the enemy intruder.

Well, as you can probably guess, 2015 experiences were too many to lump into just one post.  Picking up in June, Part 2 will follow in the next post.  STAY TUNED.  🙂