It started out just like any other day … a hot early spring day in south Florida … nice and muggy!  But this day was a bit different in that I was signed up to do something quite special.  See, we had visitors in town … the kind of visitors that you don’t get to see often. In fact, I had never seen them personally, in the wild, that is.  Off we went to go see us some birds.  It didn’t take long before we arrived at our destination.  OK, so we see some lovely white pelicans, a bunch of terns, a gathering of black-necked stilts, some coots, and a few cormorants.  While that was itself fine to see, it wasn’t what we came to see.

I pulled out my binoculars (yes, Tom would be proud) and quickly found them.  What were they, you ask?  What every new tourist that arrives in Miami and thinks that we can see out of our window everyday (thanks to the Miami Vice series), but nothing could be farther than the truth.  I’m talking FLAMINGOS!  Real flamingos too, not those roseate spoonbills that people call out as flamingos.  LOL

OK, so they weren’t a close encounter by any stretch and I had left my 500mm lens at home, but they were there.  I felt a sense of awe in me that is usually reserved for when I see my first brown bear each year in Alaska.  🙂

It was fascinating to observe them – 4 in all, 3 adults and 1 juvenile.  It was a bit frustrating as they spread out a bit and seemed to have their heads in the water more than not, as they dined on algae, aquatic invertebrates, and small fish.

We photographed them for about an hour and were ready to leave when all of a sudden one took flight!  Having my gear already in hand, as we were literally ready to pack it up, I immediately dropped everything but my camera and began to shoot it in flight … against all hope of getting a shot.  To my surprise, it wasn’t all that bad.

I was amazed at their beauty and grace … that long slender neck, beautiful black tipped bill slightly bent, that amazing 60 inch wingspan, and those long legs … executing the perfect extension in flight.  I don’t believe that I even muttered a breathe until it landed.

Funny how it reminded me a seaplane coming in for a landing and splashing on touchdown as it continued to coast just a bit.

Soon it settled into the water, but not before it gave us a nice look at its impressive wingspan.

Upon its arrival, which was closer to us than the others, the various water birds who were resting nearby, all took flight in unison. 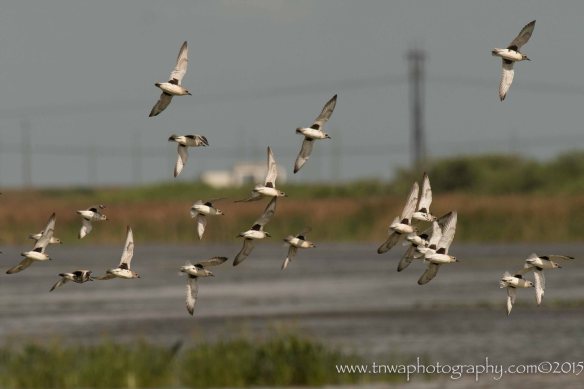 It began to forage around for food.

Soon it encountered some other birds who were sharing that same area of the wetlands.  They seemed to be unimpressed with its presence.

Not me though, I was quite impressed.  Not as impressed if I would have been to catch that amazing image of the flamingos mating a few weeks later.  But hey, you take what you get and I guess that means one day I’ll be even more excited!  🙂

Next up:  How about a visit with a lovely osprey family?

4 thoughts on “An Unusual Visitor”