In 2016, the National Park Service will be celebrating its centennial birthday!  Leading up to that event, they have launched a “Find Your Park” campaign, where visitors tell stories about “their” park.  Recently I launched a 9-day series of #FindYourPark images and stories on my flickr page (if you haven’t seen it yet and are interested, click on the flickr link, scan down several weeks of images, and give it a look).  I found it difficult to designate “my park” … should it be the one I visit most often, the one my soul calls to the most, the one I find most beautiful, or perhaps the one geographically closest?

Geographically, “my park” would then be Everglades National Park.  🙂  Now the Everglades NP is an amazing place to visit, has so much beauty to explore, and holds such an environmental significance to Florida and worldwide as well.  So, let’s visit there virtually together in this blog post.  Ready?

Now this is what I’m talking about … pure iconic Everglades … an early morning sunrise often is accompanied by mist and low profile fog … so very beautiful.  Water levels change drastically depending on the season and recent rainfall in the Everglades.  The Everglades represents such change that you can only be guaranteed that each day will have a look all its own – very different than the day before or even the day after.  It’s totally amazing!

Having grown up in South Florida and visiting the Everglades more that I can easily count, on one recent very foggy morning, I was treated to a new phenomenon for me … a fog bow.  Similar to a rainbow, but it lacks color, due to the small size of the water droplets, it was fabulous to see.  Immediately I pulled off the road to try to document what I saw.  Have to say that it was a fairly close rendition of the moment.  🙂

Being that these images were from February, much of the wildlife encountered revolved around the birds.  See, the Everglades are an important part of many species of birds and their migratory paths.  I joke too because once the warmer weather comes, as well as the skeeters, even the birds don’t want to hang around (OK, they probably leave for other reasons ;-), and good thing because you’ve got to really want to hang out in the heat and humidity and get totally bit up to come in the height of the summer).

Roseate spoonbills arrive to various ponds and waters to do some feeding and begin looking for their mate.  About this time, they begin to get those fabulous breeding colors that make them irresistible to all who catch a glimpse of them.  So bizarre looking for sure, but gorgeous!

The pileated woodpeckers are just one of the birds which call the area their local hangout.

Most times they’re quite cooperative, but eventually they launch for destinations unknown. 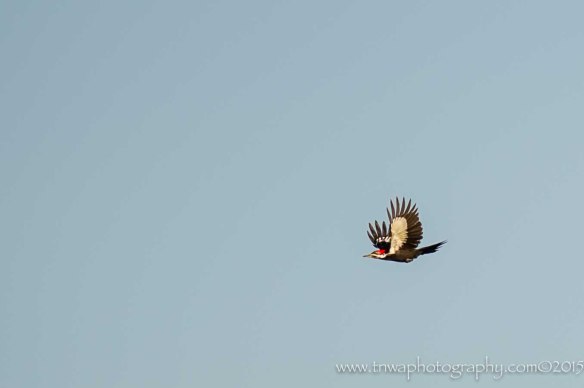 Of course, the Flamingo area of the Everglades most dominant resident bird is the osprey. In the winter they build their nests, mate, sit on their eggs, and eventually raise their young.  It’s always fascinating to watch dad bring in a fresh catch for mom as she tends to the nest.  Yum!

Black necked stilts, as in the image below, as well as avocets and yellowlegs, etc, also join in on the fun at Eco Pond.

Red shouldered hawks are seemingly plentiful as well.  Sometimes you see them … sometimes you don’t … until off they fly with a quick launch.  So very beautiful.  American kestrels and northern harriers often make themselves visible as well.

Probably one of the most animated of all birds to visit is the reddish egret.  They always make a grand entrance as they fly low just above the waters surface, allowing their reflection to be seen.  They fly with such grace and beauty … such sophistication.  But don’t let that fool you, for they look more like drunken sailors as they run around doing silly antics as they fish for food.  I dare you to watch them for more than 5 minutes without getting a huge grin on your face, or if you’re like me … busting out in laughter.

While the Everglades always has its fair share of brown pelicans, they also get white pelicans too.  Again, they also have quite the splashdown landing, which commands your attention when they fly in.

I’m continually amazed at how they go about catching their food.  They seemingly eye it with their heads on a sideways angle, then slam their head and beak into the water and go for it!  You know that they’ve hit pay dirt when they then sit up and swallow.  So fascinating to watch. 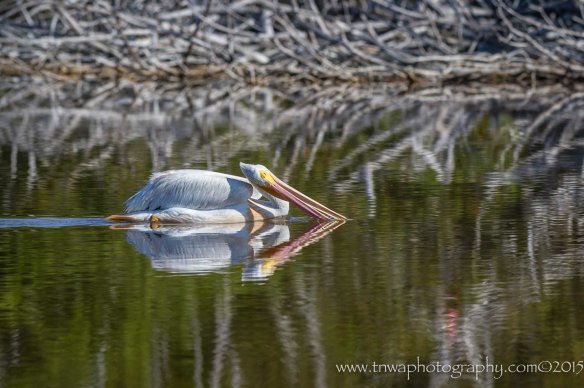 Probably one of my favorite wading birds are the lovely and delicate-looking black-necked stilts.  So very beautiful and skilled at catching the tiniest of minnows, they get quite beautiful this time of year with those bright legs and big red eye.  Soon they will begin their courtship and mating.

Before long the osprey babies get big enough to make their presence known.  Not only do they offer the photographer a nice glimpse at their big orange eyes, but they also sure learn quick how to scream at dad to bring them some dinner.  🙂

Yes, the landscapes of the Everglades are iconic and second to none.  Case in point it this view of what’s affectionately known as the “Z” tree.  Nature is quite amazing, don’t you agree?

Now no trip to the Everglades is ever complete, at least not for Tom & I, without a stop at the famous “Robert’s” on your way out.  The best key lime milkshakes in town (as well as many other exotic flavors) and much more for the tourists.  For me, I always appreciate it when they grow the sunflowers along the roadside … which is Florida-unique when coupled with the palm trees in the background!

Hope that gave you an idea about Everglades NP.  That being said, take a moment to ponder and ask yourself … where is your park? … then participate in the #FindYourPark movement in celebration of the NPS.