How do you know when you’re going to have a great time in Denali National Park?  Of course … when your first image goes something like this … how can you miss!  Denali is always an amazing place, but when you combine the beauty of the Denali wildlife & wilderness with the arrival of the fall colors and add a dash of sensing the beginning of the moose rut, this is what you get.

Of course, on our first day in Denali NP, we were also greeted by the feeling of the arrival of winter as well!

Now some visitors might have been quite bummed to have this greeting waiting for them, but when you reside in the heat and humidity, you tend to be quite excited!  SNOW! … and lots of it!  (Thanks to Rebecca Tifft for snapping this image of Tom & I for us) 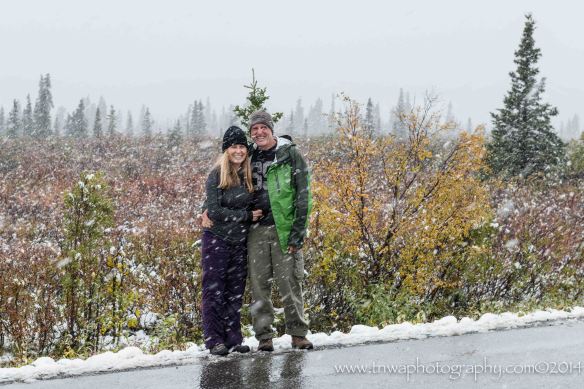 Denali NP is unique in that one can only explore the first 15 miles in their own vehicle.  After reaching Savage River, one can only travel to the interior of the park on a bus … whether it be an interpretive one or simply a shuttle bus.  But that doesn’t mean that awesome views and wildlife can’t be found in those first 15 miles.  The clouds in the skies provided for amazing landscapes. 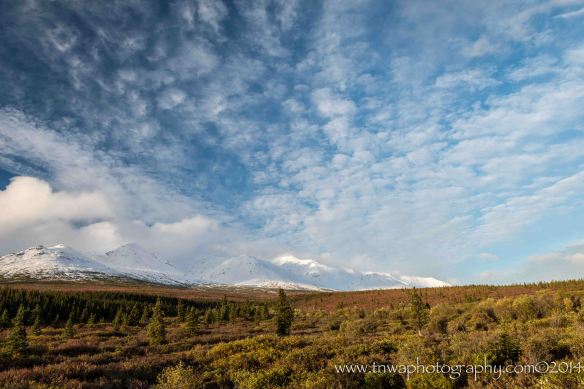 Shortly after Savage River, one starts to look for caribou, amongst other wildlife.  In the late summer/early fall, the bulls may still have their velvet covered antlers or the velvet may have already been shed, leaving their antlers to be quite bloody looking. 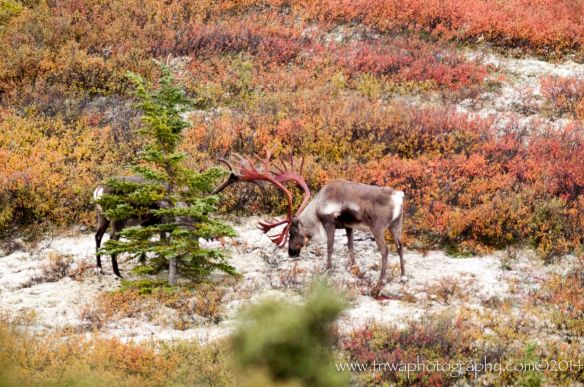 Bears are also quite often seen right outside your shuttle window.  This particular one was walking along the braided river and eventually entered the river to cross it.  Funny … if you look closely, it seems as those this one has white nails.  Apparently, they can have a variety of claw colors, though I found this one quite unusual.  LOL 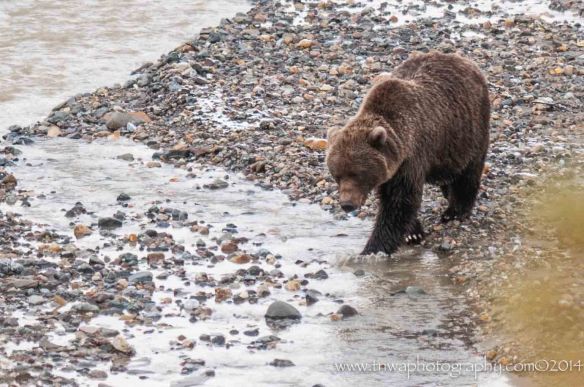 Sometimes, they are quite far away.  However, the sight of observing this sow and her 2 cubs, as they travelled across the snow covered landscape was pleasing to me.  Gives the viewer a sense of the vastness of the land … as well as the harshness of the winter-like conditions that they and the other wildlife endure. 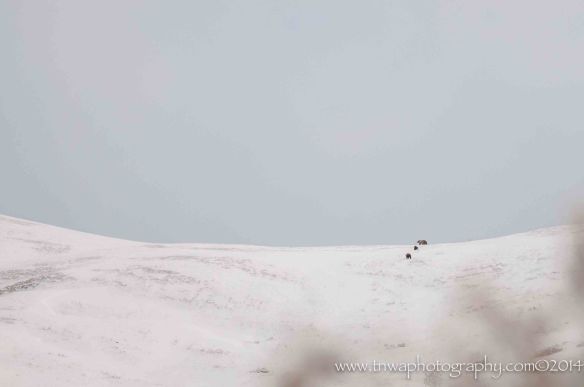 It wasn’t our first snowfall experienced in Denali, in fact once we had snowfall in July!  You just can’t predict the weather in Alaska … especially in Denali.  What you can predict is that you’ll be treated to some of the best wildlife viewing in the US.  When you get to see the animals in the midst of the snow-covered landscape, you’ll also know that you hit the jackpot!

The landscape itself looks so dramatically different in the snow too, whether dusted with a thin cover of snow or dumped upon, it’s all quite breathtaking. 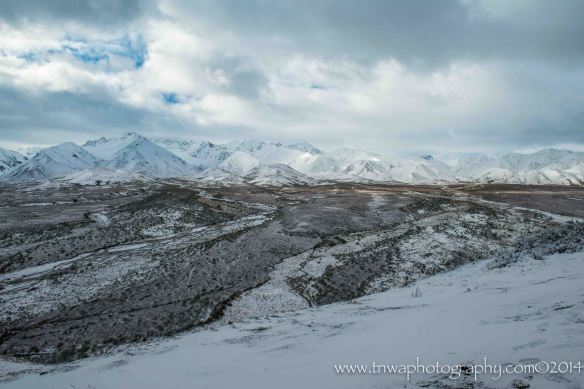 The iconic view from Stony Hill Overlook is quite different in the snow, but still remarkable.  Now that I think about though … it’s always different no matter what time you visit.  Sometimes you get full mountain (Mt McKinley, aka Denali), which we did on several days while we were there, sometimes you get no view at all, and sometimes you get this partial view.

And the viewing of Denali constantly changes throughout the day, so you can never give up on trying your luck (except of course when it’s dumping snow relentlessly, as it was on our first evening in the park).  🙂

Unique images of the wildlife, desperate to continue to get their fill of nutrition before this unanticipated snow storm becomes an expected daily event, make for amazing photo opportunities. 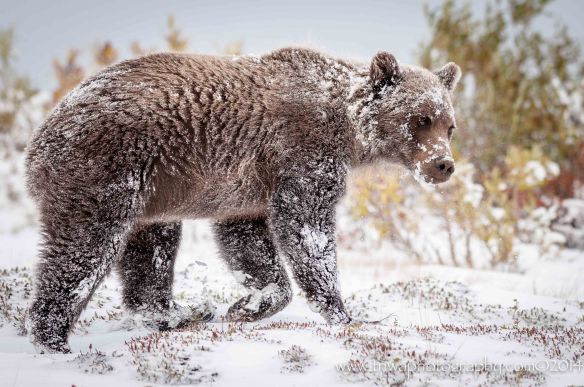 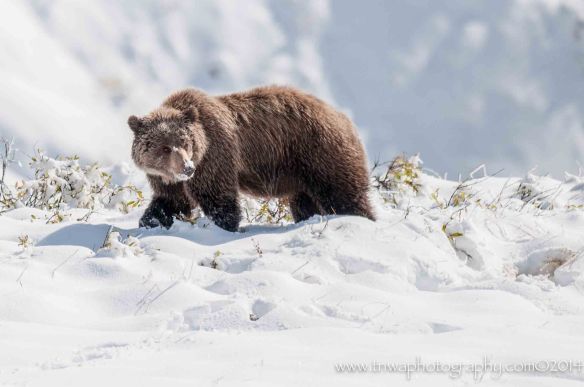 Photo ops … it’s not just for the bears … as this adorable red fox entertains us with its own “vogue” looks as well. 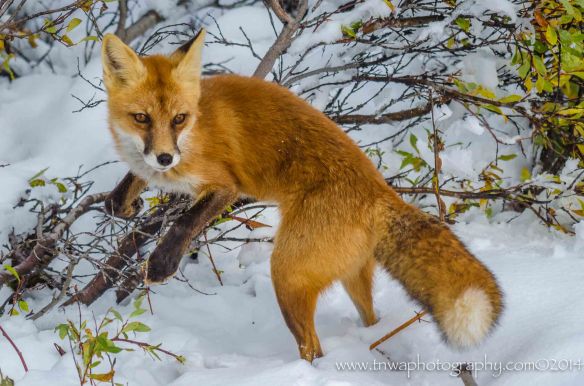 In the early evening, the snow cover from the night before had already began to melt, thanks to the clear skies which usually follow the snow’s nasty skies.  More bull caribou are encountered dining on the autumn-kissed tundra.  Below is actually a great example of how the bulls might have their velvet (on left), or may have previously shed their velvet already (on right).  Like most things in nature, everything progresses at its own pace.  The females which are pregnant later in the season will keep her antlers, while the other females as well as the bulls, will eventually shed them after the mating season.

The moose rut usually takes place later in September or early October, so lots of bull moose begin to arrive near the front of the park (i.e. those first 15 miles) about this time and begin to jockey for superiority and the sweetest females.  🙂 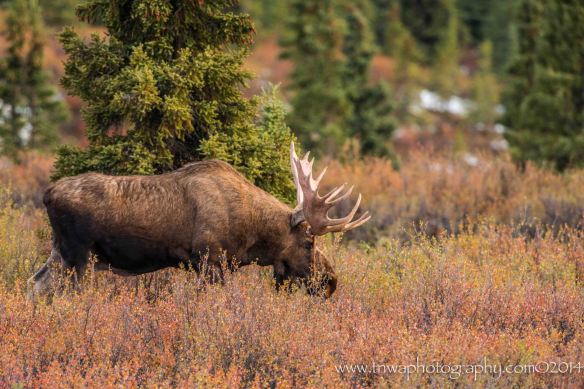 Often at this time the females will hang out with other females.  Sometimes they are followed closely by a bull that might be in pursuit.  The bulls are quite patient and wait until the time is right. 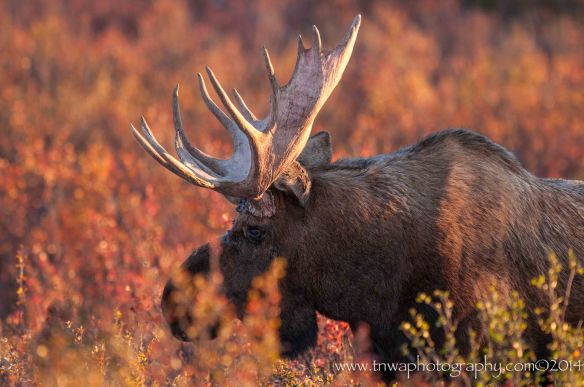 Stay tuned:  More to come from Denali NP and its grandeur.  I promise, I won’t make anyone wait that long either.  🙂

6 thoughts on “I Didn’t Forget About Denali NP (Who Could?)”