Our last day in Yellowstone NP finally arrived.  I remember in the beginning, it seemed like four days would be plenty … I would have my fill of the cold … the snow coach … the photography.  What was I thinking?  Nothing could have been farther from the truth. 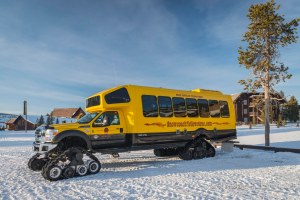 Our day started with a group of elk in the middle of a side road near the river.  Before this, we had only seen small gatherings of elk.  This group seemed to have a dominant elk, which seemed to keep its eye on us.  They seemed quite inquisitive … 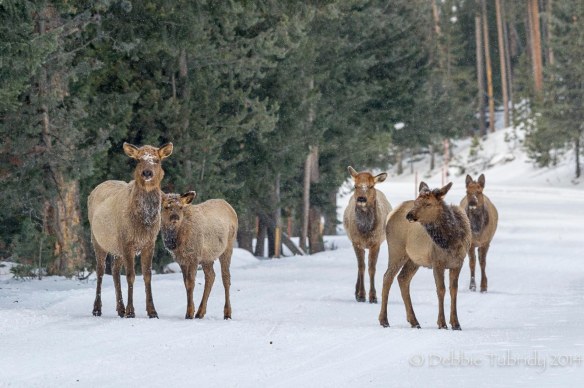 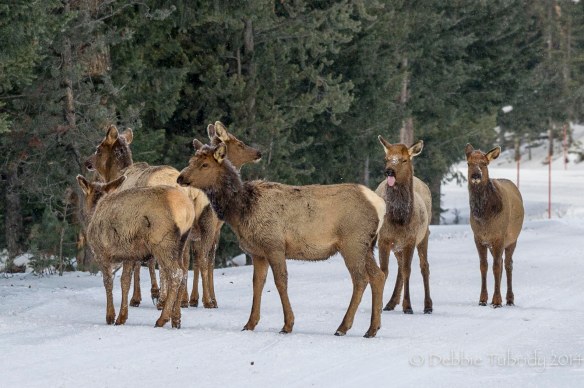 Before too long they bolted into the nearby brush – one at a time – as they leaped over smaller shrubs and trees.  They have a tough life ahead of them, especially in the winter and I hope that they remain safe.

Another wonderful bald eagle sighting was encountered, right on the roadside.  This mature eagle sat in the nearby tree and offered us some awesome shots. 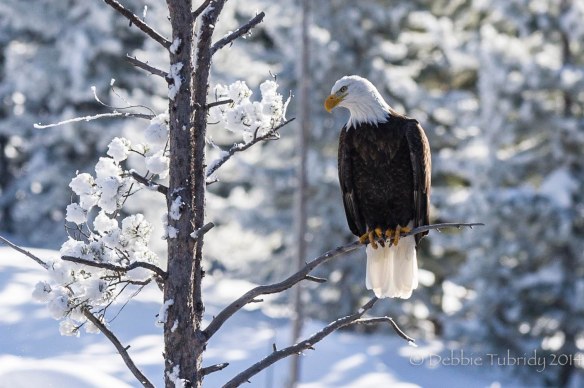 It too, got a bit bored with us, or tempted by something in its immediate surroundings and off it went, but not before clipping its wing on a branch, allowing a drift of snow to fall down around it as it took off to its next destination. 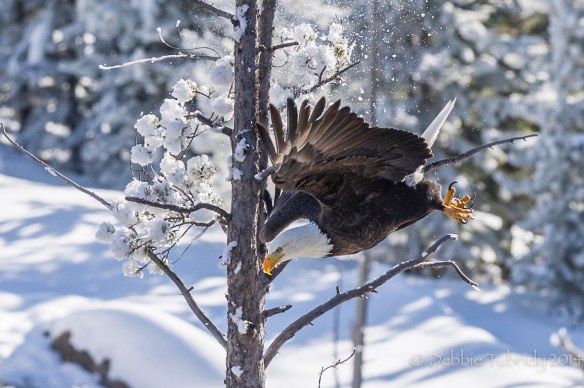 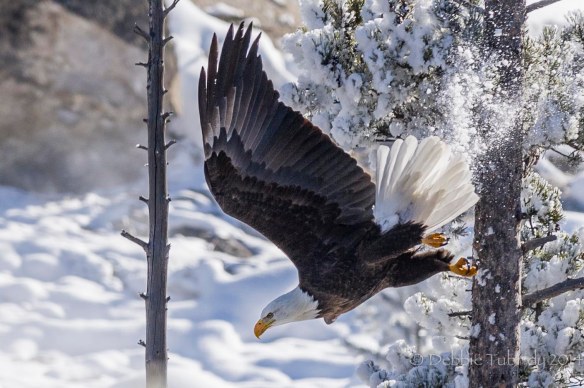 Roadblocks seemed to be the theme today as we traveled throughout the park.  This time it was a herd of bison – all seemingly sunning themselves in the middle of the road.  They didn’t seem to be in a rush to get anywhere fast, so we became delayed by them. 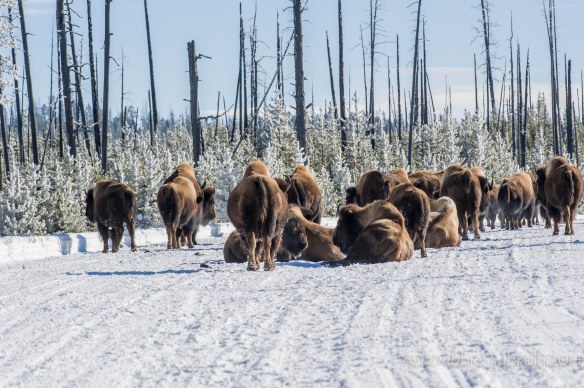 Of course, what do you do when you’re being held up by wildlife in Yellowstone?  You get out and begin to capture it. 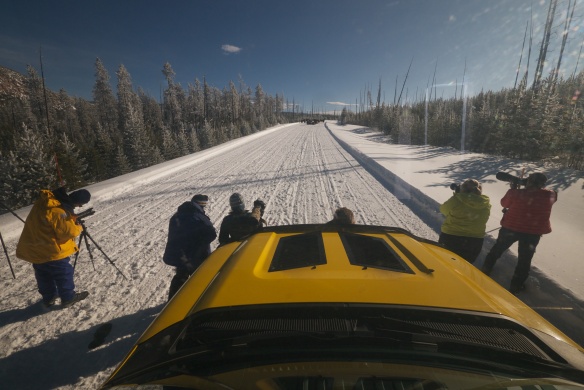 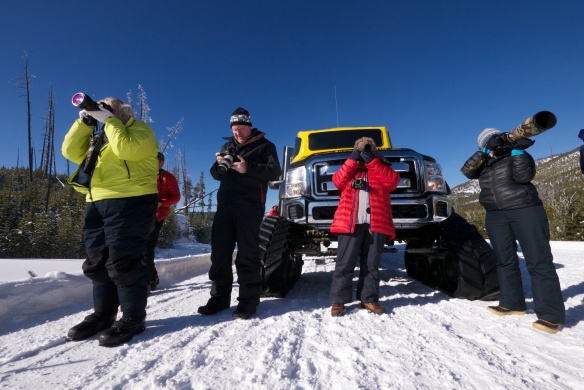 It took some time, but eventually they got up, one by one, and began to move on down the road.  We took the opportunity to bypass them. 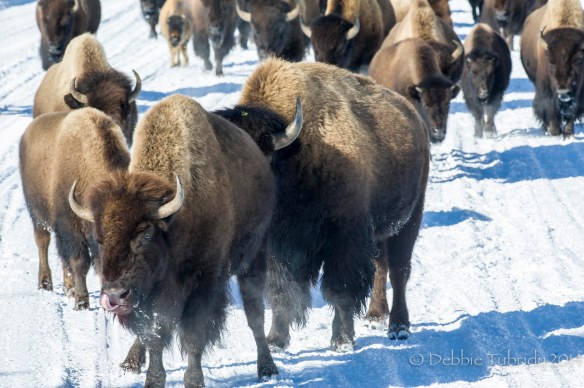 Late in the day, we began to make our last drive from Madison Junction to West Yellowstone.  Along the river, in awesome light, we came across another group of elk, but this time they were bulls. 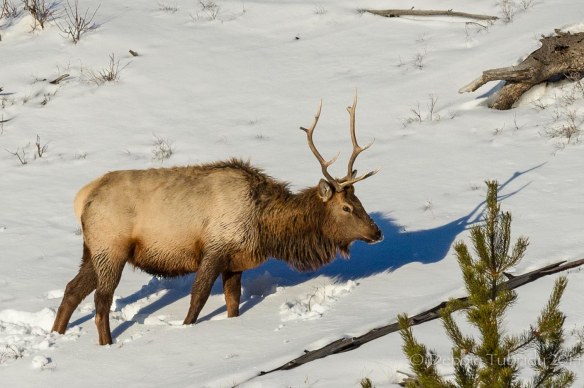 We were totally enjoying our time shooting them, when all of a sudden, I heard Dan say … “someone said that there’s a bobcat down the road”.  Well, that was all that I needed to hear.  While the bull elk were gorgeous … I mean, a bobcat … AGAIN!  Off I ran, along with several of my fellow photographers.

Sure enough, it was our bobcat from our first day in Yellowstone.  Only this time, it was on the move!  I ran into the snow and began to shoot it, but found it hard to keep up.

As I struggled making my way through the snow, I was not so gently reminded by my body and cardiovascular system, that I was from the flatlands of Florida, which was also warm and humid.  This environment was cold and dry and the altitude was obviously higher that what I was normally used to.  I was also not accustomed to trekking through the deep snow.  After some time, I made my way to the road, which afforded me the ability to keep up the pace of the bobcat. 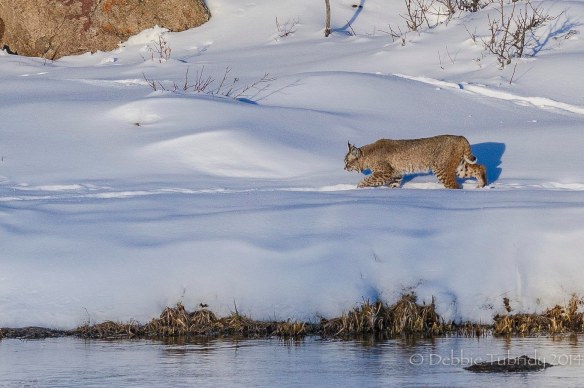 Several times this cat stopped in its tracks, as it was stalking a duck floating in the water.  I feared that we would witness carnage, but thankfully for me, that never happened. 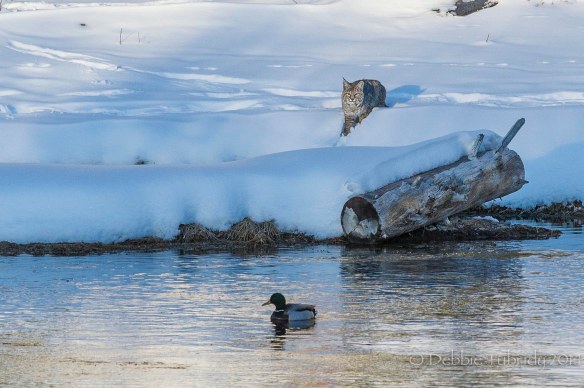 I couldn’t believe the beauty of this creature and the grace it possessed as it made its way down the river … to the exact location that we saw earlier in the week.  I truly felt blessed to have shared in its day.

I couldn’t imagine a better ending to our time spent in Yellowstone!  As we drove back to our lodging, I believe that collectively we all arrived with big smiles on our faces.  🙂  I know that I did. 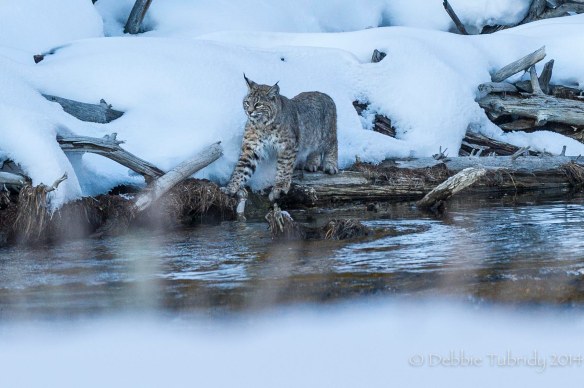 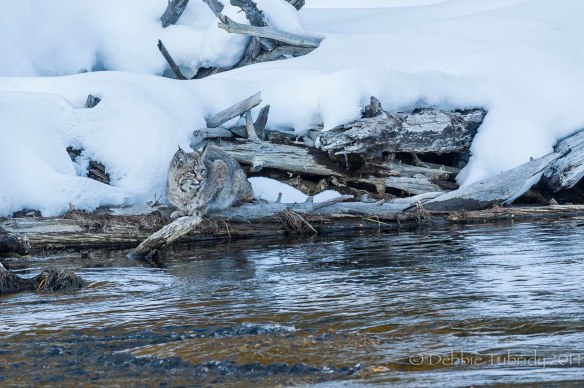 Honestly, I didn’t know what I expected from this photo tour.  What I found was obviously amazing photo opportunities (both wildlife and landscape), but even more pleasantly surprised was the amazing people that I shared this trip with.  I’m quite sure that many of them I will see again at some amazing place or another.  I also learned a lot about myself – most of which I won’t bore you with – but I encourage everyone to challenge themselves throughout life.  It’s always good to see what you’re made of.  🙂 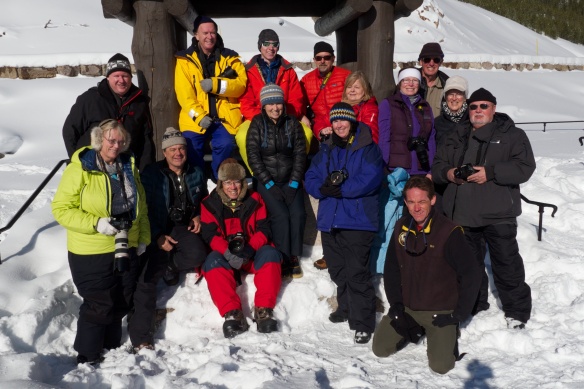 Thanks so much to Dan & Tanya Cox of Natural Exposures!  Your hospitality was truly wonderful – from start to finish!  Oh, I can’t also forget to thank Colter, tour assistant-extraordinaire!  You’re amazing!

Next blog post will most likely be something more local, so stay tuned.  Until then ….. 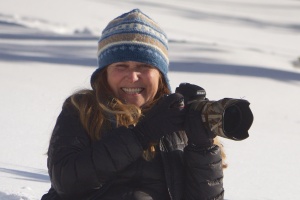